Migraine is the most common chronic onset headache. About 6% of men and 18% of women in the general population suffer from this disease. According to the 2004 International Headache Society (HIS) classification standard, migraine is divided into migraine without aura (MO) and migraine with aura (MA). MO accounts for about 67%, and the clinical manifestations are moderate to severe, unilateral, and pulsatile Headache, accompanied by nausea, vomiting, phonophobia, photophobia, etc., lasting 4-72 hours; MA In addition to the above clinical manifestations, neurological symptoms such as dysarthria and visual field defects will appear before migraine. Aura symptoms such as hemiparesis on one side, numbness of the face or extremities. The specific pathogenesis of migraine is still unclear. Both neurophysiological and neurofunctional studies support that migraine is a neurological disease, and excessive nerve excitement is the biological basis of migraine susceptibility. Familial hemiplegic migraine (FHM) is a rare autosomal dominant inherited migraine with aura symptoms. It is currently the only clear monogenic migraine. It follows the Mendelian rule of inheritance and is one of the good studies model of common migraine. 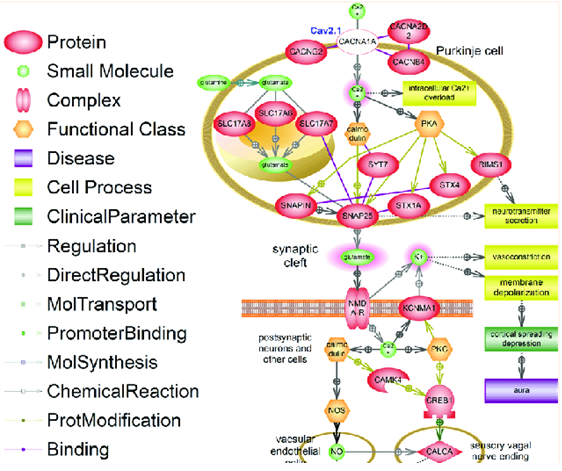 FHM was first reported by Clark in 1910 and has now reported at least 50 families. FHM is an autosomal dominant genetic disease, a relatively rare MA. Thomsen et al. conducted a large population-based study in Denmark and found that it was characterized by transient hemiplegia, followed by migraine. It can be divided into pure FHM (80% of families) and FHM with permanent cerebellar signs (20% of families). Features of FHM attacks: 1. The onset of FHM in children or young adults. The average age of onset is 17 years old, and the average age of disease is 37 years. Most patients (73%) have had an attack in the past 2 years, and those have not had an attack in the past 2 years are 87% of patients over the age of 50; 2. In addition to migraine and general aura symptoms, they are accompanied by different degrees of hemiplegia; 3. The aura symptoms generally last for 30-60 minutes, followed by migraine; 4. Mild brain trauma and Angiography can induce the onset of FHM; 5. FHM is occasionally accompanied by fever or constantly changing consciousness, from confusion to coma, which can last for several days to several weeks; 6. About 20% of FHM patients are accompanied by persistent cerebellar symptoms, such as Nystagmus, progressive ataxia, cerebellar atrophy, etc.; 7. Some patients with FHM can also have migraine without hemiplegia. In short, FHM is a type of migraine, and its related gene research is also a key candidate gene for migraine with or without aura and without hemiplegia.

Genotype genetic linkage studies have confirmed that FHM is caused by a single gene mutation. Current studies have found that there are two responsible genes related to FHM. Among them, 50%-75% of FHM patients are caused by mutations in the CACNL1A4 gene on chromosome 19. CACNL1A4 gene, also known as CAC-NA1A gene, is a brain voltage-gated P/Q calcium channel α1A subunit gene, which encodes 2 261 amino acid residues and is located in the range of 300 kbp between the D19s216 and D19s215 marks on chromosome 19p13. There are 15 types of CACNL1A4 mutations reported, all of which are missense mutations. The missense mutations are located in important functional areas of subunits, adjacent to ion channels or in voltage sensors. The T666M mutation in which methionine replaces threonine is the most common form of mutation in the CACNL1A4 gene. The mutation changes the intensity and gating characteristics of P/Q-type currents, and abnormal protein channels cause changes in Ca2+ flow. Garden et al. found that the density of functional ion channels caused by gene mutations in different cell types is different. Two common effects for all FHM mutations are: enhancing the Ca2+ influx of a single channel or reducing the maximum in neurons Ca2+ flow density. Kor et al. analyzed 33 families of probands and found that 5 unrelated FHM families had T666M mutations, of which 3 families showed cerebellar ataxia, 1 family had conscious disturbance but no hemiplegia, and 1 family had progress cognitive dysfunction. Hemiplegic migraine in CACNL1A4 mutations has a broad clinical spectrum, and its clinical variability is partly related to the type of mutation. Another gene related to FHM is related to mitochondria 1q21-23. Marconi et al. reported 2 pure FHM Italian families. According to linkage analysis, it was found that the key FHM gene was in the 0.9 Mb region on 1q23. De Fusco et al. showed that mutations in the ATP1A2 gene encoding the Na + /K + pump α2 subunit are related to the FHM associated with the 1q23 gene. In addition, 30%-40% of FHM patients have nothing to do with the above two genes, and there may be at least another gene related to FHM.