Generalized Epilepsy with Febrile Seizures Plus

Generalized Epilepsy with Febrile Seizures Plus

Generalized epilepsy with febrile seizures plus (GEFS+) is a series of seizure disorders with different severity. GEFS+ is usually diagnosed when family members have febrile epilepsy (caused by a high fever) and other types of recurrent epilepsy. Additional types of epilepsy usually involve both sides of the brain (general epilepsy); however, epilepsy that involves only one side of the brain (partial epilepsy) also occurs in some patients. The most common types of epilepsy in patients with GEFS+ include myoclonic epilepsy, which causes involuntary muscle spasms; flaccid epilepsy, which includes sudden onset of weak muscle tone; and absence seizures, which cause transient loss of consciousness. The most common and mildest feature of GEFS+ symptoms is a simple febrile convulsive seizure, which begins in infancy and usually stops at 5 years of age. When febrile convulsions continue to occur after 5 years of age or other types of convulsions occur, this condition is called febrile convulsions plus (FS + ). FS+ seizures usually end in early puberty.

A disease called Dravet syndrome (also known as infantile severe myoclonic epilepsy or SMEI) is generally considered part of GEFS and is the most severely symptomatic of the disease. Affected babies usually have seizures (status epilepticus) caused by fever that last several minutes. Other types of seizures include febrile convulsions, which begin in early childhood. These types may include myoclonic seizures or absence seizures. In Dravet's syndrome, these seizures are difficult to control with medications and will worsen over time. Decreased brain function is also common in Dravet syndrome. Affected individuals usually develop normally in the first year of life, but then they stagnate and even degenerate.

GEFS+ is inherited in an autosomal dominant inheritance mode, which means that one copy of the altered gene in each cell is enough to cause the disease. In some cases, the affected person inherits a mutation from an affected parent. Other cases are caused by new mutations in genes and occur in people who have no family history of disease. Interestingly, Dravet syndrome is almost always caused by a new mutation, although it can be inherited from GEFS+ parents. Other forms of GEFS+ are usually inherited from affected parents. Rarely Dravet syndrome or other forms of GEFS+ are inherited from parents with somatic mosaicism. Somatic mosaicism means that certain cells in the body have genetic mutations, while others do not. Parents with mosaicism may be less affected or show no signs or symptoms of GEFS+.

Some gene mutations, including some unidentified genes, can cause GEFS+. The most common related gene is SCN1A. More than 80% of Dravet syndrome cases and approximately 10% of other GEFS+ cases are caused by mutations in this gene. Mutations in other genes have been found in only a few affected individuals or families.

The SCN1A gene and other GEFS+-related genes provide instructions for making channel fragments (subunits) that transport positively charged sodium atoms (sodium ions) into the cell. The transport of these ions helps to generate and transmit electrical signals between nerve cells (neurons). The protein produced by other genes involved in GEFS+ is another subunit of the ion channel called the GABAA receptor. GABAA receptor channels block (inhibit) signal conduction between neurons. There are other GEFS+ related genes also involved in neural signals. 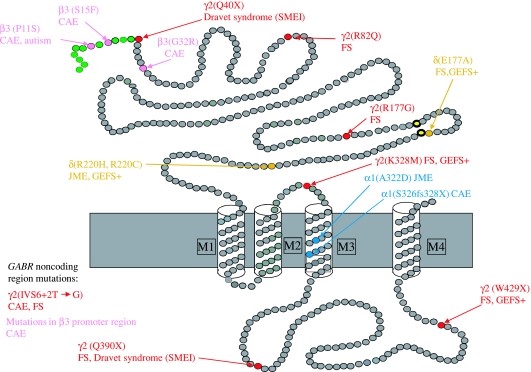 Mutations in the SCN1A gene have multiple effects on sodium channels. Many of the mutations that cause Dravet syndrome reduce the number of functional channels in each cell. Mutations that cause mild GEFS+ disease may change the structure of the channel. All these genetic changes affect the channel's ability to transport sodium ions to neurons. It is believed that certain mutations reduce channel activity, while other mutations may increase channel activity. However, it is not clear how these changes cause seizures. Some studies have shown that certain mutations in the SCN1A gene cause the signals between neurons to be constantly turned on (stimulated). Researchers believe that overstimulation of certain neurons in the brain triggers abnormal brain activity associated with seizures. Changes in the GABA A receptor subunit gene weaken the function of the channel, leading to uncontrolled signal conduction between neurons, which is likely to cause seizures. Researchers do not understand how changes in any one gene associated with GEFS+ can lead to a series of seizures.