Hypomagnesemia with secondary hypocalcemia is a genetic disease caused by the body's inability to absorb and retain magnesium ingested through diet. Because it cannot be stored and absorbed by itself, the magnesium content in the blood is very low (hypomagnesemia). Hypomagnesemia impairs the function of the parathyroid gland, a small hormone secreting gland located in the neck. Under normal physiological conditions, the hormones secreted by the parathyroid glands participate in the regulation of blood calcium levels. When its secretion level drops, the blood calcium level will rise. Studies have found that magnesium is an essential component for the production and release of parathyroid hormone. When the absorption of magnesium is impaired, the production of parathyroid hormone will be insufficient, leading to a decrease in blood calcium levels (hypocalcemia). Because hypocalcemia is caused by hypomagnesemia, it is described as "secondary".

Clinical studies have found that the lack of magnesium and calcium can cause a neurological disease that begins in infancy, including painful muscle cramps (hand and foot twitches) and seizures. If left untreated, hypomagnesemia with secondary hypocalcemia can lead to developmental delay, mental retardation, weight gain and failure to grow at the expected rate (inability to grow), and heart failure. 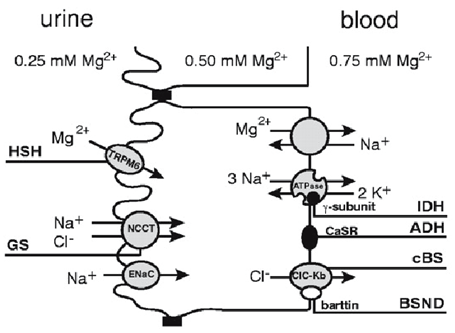 Studies have found that hypomagnesemia with secondary hypocalcemia is inherited in an autosomal recessive manner, which means that there are mutations in two copies of related genes in each cell of the patient. The parents of individuals with hypomagnesemia with secondary hypocalcemia each carry a copy of the mutant gene, but usually do not show signs and symptoms of the disease.

Studies have found that hypomagnesemia with secondary hypocalcemia is caused by mutations in the TRPM6 gene. This gene directs the synthesis of a channel protein that allows magnesium ions to flow into the cell. In addition, this channel may also allow a small amount of calcium ions (Ca2+) to enter the cell. Since magnesium is involved in many cellular processes, including the production of cell energy, the maintenance of DNA building blocks (nucleotides), the production of proteins, and the growth and death of cells, the discovery of mutations in its channels will trigger a series of changes in cells. In addition, since magnesium and calcium are also necessary for the normal function of nerve cells that control muscle movement (motor neurons), their deficiency can cause movement disorders.

Studies have found that TRPM6 channels are usually embedded in the epithelial cell membrane of the large intestine, the distal convoluted tubules of the kidney, the lungs, and testes of men. When the body needs additional Mg2+, the TRPM6 channel allows the intestine to absorb the Mg2+ in it, and filters the fluid flowing through the kidney through the distal convoluted tubule. When there is enough or too much Mg2+ in the body, the TRPM6 channel does not filter out the Mg2+ in the liquid, but allows ions to be released from the kidney cells into the urine. This channel also helps regulate Ca2+, but to a lesser extent.

Most of the TRPM6 gene mutations that cause hypomagnesemia and secondary hypocalcemia result in a lack of channel functional protein. The loss of functional TRPM6 channels will prevent the absorption of Mg2+ in the intestine, and cause excessive Mg2+ to be excreted by the kidneys and released into the urine. Lack of Mg2+ in the body will weaken the production of parathyroid hormone, which may reduce the level of Ca2+ in the blood. In addition, hypomagnesemia and hypocalcemia can destroy many cellular processes and impair the function of motor neurons, leading to neurological problems and movement disorders. If the condition is not effectively treated and the Mg2+ continues to be lacking, the signs and symptoms will worsen over time and may lead to early death.