Channel blocking is conducted by different types of molecules, such as cations, anions, amino acids, and other chemicals, which act as ion channel antagonists in regulating physiological response. Many different types of organic compounds can cause channel block as long as binding to some portion of the target channel's pore. Tools such as electrophysiology have been essential in locating the binding sites of open channel block molecules. Electrophysiology is an important tool in identifying channel structure. It is critical to understanding the inhibiting actions between ion channel and channel block molecules. 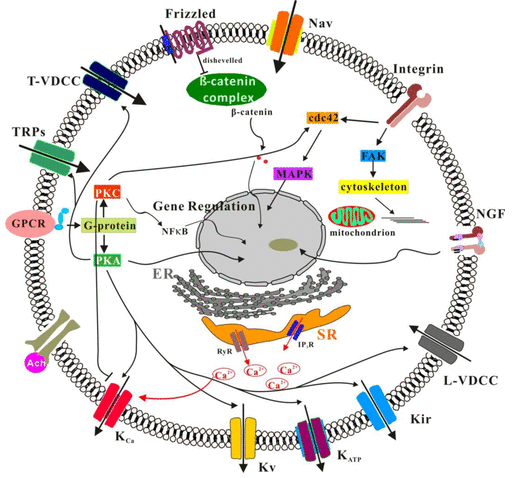 The primary role of potassium channels in cardiac action potentials is cell repolarization. Potassium channel blockers used in the treatment of cardiac arrhythmia are classified as class III antiarrhythmic agents according to the Vaughan-Williams classification scheme. Channel block induced by these agents leads to an increase in action potential duration and an increase in the effective refractory period (ERP). By increasing the ERP, these channel blockers are very useful in suppressing tachyarrhythmias caused by reentry mechanisms.

Sodium channels, which are essential to the production of action potentials, are affected by many different toxins. Sodium channel blockers, a class of potent compounds that act by inhibition of sodium influx through cell membranes. Blockade of sodium channels slows the rate and amplitude of initial rapid depolarization, reduces cell excitability, and reduces conduction velocity.

Calcium channel blockers (CCB), are a group of medications that disrupt the movement of calcium (Ca2+) through calcium channels, which are usually used as antihypertensive drugs against large vessel stiffness. CCBs can be also used to alter heart rate. There are two main classes of calcium channel blockers, Dihydropyridine(DHP) and Non-dihydropyridine. The former group is often used to reduce systemic vascular resistance and arterial pressure. The latter group includes Phenylalkylamine, Benzothiazepine and others. Various neurodegenerative diseases have been associated with excessive NMDA receptor activation. Many different NMDA antagonists and their therapeutic efficacy have been examined by researchers as a treatment option for calcium dependent neurotoxicity.

Creative Bioarray provides life science researchers tools for Pharmacological research, drug discovery, high content screening and high throughput screening. We are dedicated to be A Compound Screening Expert and would like to be a sincere and trustworthy partner for you.