Lambert-Eaton myasthenia syndrome (LEMS) is an autoimmune disease, that is, a disease in which the immune system attacks the body's own tissues. The attack occurs at the junction between the nerve and muscle (neuromuscular connection) and interferes with the ability of nerve cells to send signals to muscle cells. Specifically, the immune system attacks calcium channels on nerve endings, which are necessary to trigger the release of a chemical substance (acetylcholine). The fewer calcium channels, the less acetylcholine is released from nerve endings. Acetylcholine is a chemical messenger that triggers muscle contraction. In LEMS patients, the reduction in acetylcholine levels is not enough to cause normal muscle contractions, which leads to muscle weakness.

Initially, LEMS can cause weakness in the thighs and hips and in the upper arms and shoulders, making walking and self-care difficult. Like myasthenia gravis (MG), it can also cause weakness in the eye muscles and muscles related to talking, swallowing, and chewing, but these symptoms are usually mild. In addition, most patients with LEMS also suffer from autonomic nervous system dysfunction (dry mouth is the most common symptom), although this aspect of the disease is usually not debilitating. In addition, studies have found that about 60% of LEMS patients have potential malignant tumors, the most common being small cell lung cancer; therefore, it is considered paraneoplastic syndrome (disease caused by cancer in other parts of the body).

In neurological examination, the degree of weakness shown by the normal strength test of LEMS is usually not as severe as the symptoms might expect. Through repeated testing, the strength will be further improved, such as, the strength will be improved by repeated grip. At rest, reflexes usually decrease; as muscles are used, the intensity of reflexes increases. This is the characteristic of LEMS.

In normal neuromuscular function, nerve impulses are transmitted from the spinal cord along axons (long projections of nerve cells). At the nerve terminal of the neuromuscular junction, the impulse is transmitted to the muscle cell. The nerve impulse causes the opening of the voltage-gated calcium channel (VGCC). The influx of calcium ions into the nerve terminal causes the fusion of calcium ion-dependent trigger synaptic vesicles with the plasma membrane. . These synaptic vesicles contain acetylcholine, which is released into the synaptic cleft and stimulates acetylcholine receptors on the muscles. Finally, the process of muscle contraction is completed. 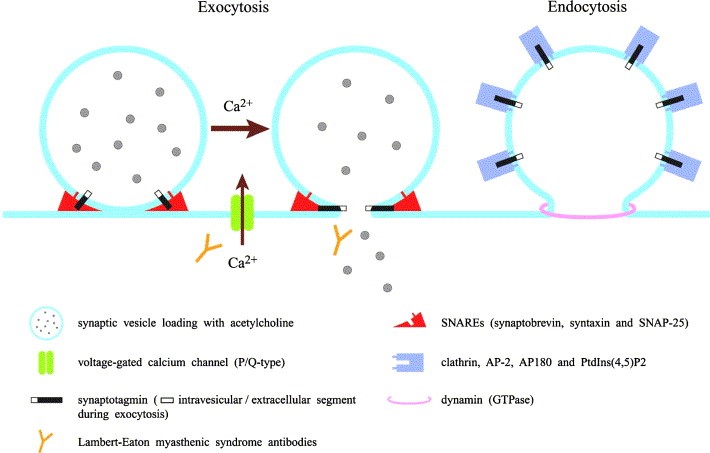 In LEMS, because the body produces antibodies against its own VGCC, especially P/Q type VGCC antibodies. Therefore, the amount of calcium entering the nerve endings is decreasing, which in turn causes less acetylcholine released from the neuromuscular junction, making the muscles unable to be better To complete the shrinking process. In addition to skeletal muscle, the body's autonomic nervous system also needs acetylcholine neurotransmission, so patients with LEMS will also show autonomic symptoms. Studies have found that there are also P/Q voltage-gated calcium channels in the cerebellum, so patients will show coordination disorders. In addition, self-produced antibodies can also bind to other proteins, such as some antibodies that bind to synaptotagmin, which is a protein sensor for calcium-regulated vesicle fusion. It is worth noting that many people with LEMS, regardless of whether they produce VGCC antibodies, but they all have detectable antibodies against the M1 subtype of acetylcholine receptors. The presence of these antibodies may inhibit the compensation effect of calcium deficiency.

In addition to reduced calcium influx, individuals with LEMS also developed symptoms of destruction of vesicle release sites in the active zone. This may also be antibody-dependent, because LEMS patients have antibodies to the components of these active regions (including voltage-dependent calcium channels). These abnormalities together lead to a decrease in muscle contractility. Repeated stimulation over a period of about 10 seconds will eventually lead to adequate calcium delivery and increase muscle contraction to normal levels.