Paroxysmal extreme pain disorder is a disease characterized by redness and warming (flushing) of the skin, and severe pain in various parts of the body. Among them, the area of redness usually corresponds to the painful part. In general, patients with episodic extreme pain usually experience pain episodes that last from a few seconds to a few minutes, but in some cases they can last for several hours. The onset of these conditions initially begins in infancy. Early in life, pain is usually concentrated in the lower part of the body, especially around the rectum, and is usually caused by bowel movements. Some children may experience constipation, which is caused by fear of triggering pain episodes. The painful episodes of these young children may also be accompanied by seizures, slow heartbeats or apneas.

As patients with paroxysmal extreme pain disease age, the location of the pain will also change. The pain episode changed from affecting the lower body to affecting the head and face, especially the eyes and jaw. The triggers for these pain episodes include temperature changes (such as cold wind) and emotional distress, as well as eating spicy food and drinking cold drinks.

Studies have found that paroxysmal extreme pain disease is considered a form of peripheral neuropathy because it affects the peripheral nervous system, which connects the brain and spinal cord with muscles and with cells that detect touch, smell, and pain.

Studies have shown that mutations in the SCN9A gene can cause paroxysmal extreme pain. The SCN9A gene belongs to a family of genes that code for the formation of sodium channels in the body. These channels transport positively charged sodium atoms (sodium ions) into the cell, and play a key role in the cell's ability to generate and transmit electrical signals. The SCN9A gene provides instructions to make a part (subunit) of the sodium channel NaV1.7. The NaV1.7 sodium channel was found in nerve cells that transmit pain signals, indicating that the SCN9A gene is involved in the transmission of pain signals, and its mutation can cause abnormal pain signal transmission. As we all know, pain receptors are part of the peripheral nervous system, which connect the brain, spinal cord and cells. These cells can sense touch, smell and pain. Among them, the pain receptor is mainly involved in transmitting pain signals. Studies have shown that the center of the pain receptor is called the cell body, located in the dorsal root ganglia of the spinal cord. Fibers called axons extend from the cell body to the whole body and receive sensory information. The axon transmits information back to the dorsal root ganglion, which then transmits information back to the brain. NaV1.7 sodium channels are also found in olfactory sensory neurons. Olfactory sensory neurons are nerve cells in the nasal cavity that are responsible for transmitting odor-related signals to the brain. 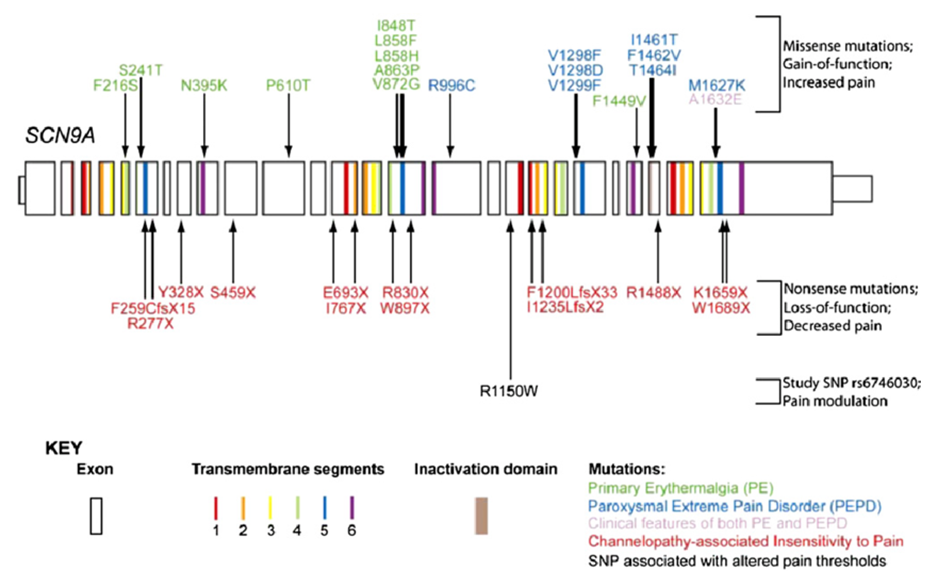 Further research found that mutations in the SCN9A gene that cause paroxysmal extreme pain can cause the NaV1.7 sodium channel to not be completely closed when it is closed, so that sodium ions abnormally flow into nociceptors. The increase in sodium ions enhances the transmission of pain signals, causing patients with paroxysmal extreme pain disorders to suffer from pain episodes. It is unclear why the painful episodes associated with this symptom change position over time, or what causes other features of this symptom, such as seizures and breathing changes.