Primary erythromelalgia is an autosomal single-gene genetic disease. Its symptoms are mainly paroxysmal severe burning pain in the distal limbs, increased skin temperature, flushing of the complexion, alleviated symptoms in cold, and the condition worsened in heat. Most of the patients start to get onset in childhood and their condition becomes more and more serious with age. During the onset, the extremities are burning like pain, and some are accompanied by headaches and other symptoms. The condition lasts for several hours in a day. In the cold winter, soak your feet in ice water to reduce pain and seriously affect the normal life of patients. However, due to the unclear pathogenesis, there is currently no specific medicine to treat this disease. As early as the 1950s, some people conducted research on the disease. At that time, it was mainly analyzed from the perspective of epidemiological investigation, and its pathogenesis was not involved. With the continuous development of molecular genetics, some people have initially mapped the disease-causing gene to scn9a on chromosome 2. The research on this gene after gene knockout also supports this possibility. The clarity provides an important basis for pathogenic mechanism.

Primary erythromelalgia is clinically manifested as burning pain, redness, and sensitivity to temperature changes. The disease usually occurs under heat stimulation from the external environment or during exercise. Exposure of the affected area to cold water or raising the affected limb can alleviate the condition. So far, there is no conclusion on its pathogenic mechanism. The main points of view are as follows: local microvascular circulatory disorders caused by patients with acral microvascular arterial shunt, temperature-regulated blood flow increased, and nutrient blood flow decreased, resulting in skin temperature of the affected area. Increased skin metabolism speeds up skin metabolism and increased blood vessel oxygen consumption, leading to hypoxia in tissues, causing dilation of small arteries, skin congestion, and redness and swelling of the affected area, and then increased skin temperature and burning pain. Most scholars believe that the cause of primary erythromelalgia lies in local microcirculation disorders.

Due to the reduction of the efferent nerve fibers and the weakening of the nerve fiber function in the affected area and the surrounding area, the patient's nerve response index in the affected area is higher than the sensory threshold of normal people for heat, while the sensory threshold for cold is lower than that of normal people. In addition, the patient is more sensitivity for painful, which also reflects the typical symptoms of erythromelalgia aggravated by heat, relieved by cold, and pain like burning. The good therapeutic effects of nerve resection, nerve sealing, and nerve destructive treatment used in clinical treatment also support the view that erythromelalgia is a neurological disease. 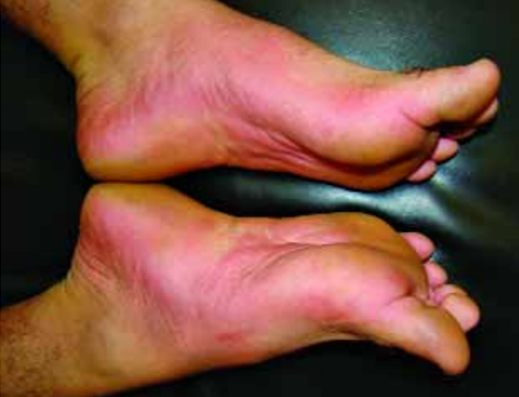 Abnormal sodium ion channels cause blood vessels to dilate and conduct to nerves. The patient feels pain, swelling of the extremities, showing redness, swelling, burning pain and other major symptoms of primary erythromelalgia. Studies have shown that one of the members of the sodium ion channel, scn1a, is sensitive to temperature. Sodium nitroprusside and other sodium preparations play an important role in treating and alleviating the patient's condition. These findings indicate that the disease may be related to abnormal sodium ion channels. It can be seen that there is still controversy about the pathogenic mechanism of erythromelalgia, which may be related to the heterogeneity of the disease, or may be related but not identical phenotypes produced by related pathogenesis, thus There are different clinical manifestations of erythromelalgia. Therefore, it is necessary to conduct in-depth research to clarify the pathogenic mechanism.

Scn9a May Be The Causative Gene Of Primary Erythromelalgia

Primary erythromelalgia has a typical genetic tendency and is an autosomal single-gene genetic disease. The Dutch scholar Drenth et al. mapped the pathogenic gene to 2q31-q32 in 2001, laying an important foundation for further clarifying the pathogenic genes of primary erythromelalgia. According to this clue, Chinese scholar Yang Yong et al. found that the pathogenic gene may be scn9a. Scn9a is one of the members of sodium ion channel, and it also plays an extremely important role in maintaining the normal function of the body like other sodium ion channel members. This gene is mainly expressed in the peripheral nervous system and is mainly related to pain perception. Researchers discovered the mutation site T2543C of scn9a in one case. Analysis shows that this missense mutation may cause changes in the structure of SCN9A protein, cause sodium channel dysfunction, and then lead to the occurrence of erythromelalgia.

As a known sodium channel gene, scn9a encodes 197 amino acids, also known as Nav1.7. In experiments on alternative splicing studies of sodium channel gene families, quantitative PCR found that specific alternative splicing of such genes occurred in the dorsal root nervous system. The study also studied the rat model of neuropathic pain and detected the changes of sodium ion channels in the spinal cord nerve ligation of rats. It was found that the response of scn9a to neuropathic pain in the dorsal root nerve was reduced by 27%. It is suggested that scn9a is related to nerve pain. The study of gene knockout of the scn9a gene further revealed that in the scn9a knockout mouse model, the sensitivity of mice to noxious thermal stimuli was reduced by about 20%, and the sensitivity to noxious mechanical damage was also significantly reduced. At the same time, it was also detected that the gene knockout mice had serious defects in the burning pain response, which proved the important role of scn9a in neuropathic pain and burning pain. Other studies have shown that scn9a is mainly expressed in small dorsal root nerves and sympathetic nerves, and most of these neurons are nociceptors, revealing that scn9a is related to the recovery and closure of slow inactivation. The mutant scn9a has a hyperpolarization during the transformation process of activation and inactivation, which leads to the amplification of the depolarization of the small subgate threshold, which further confirms that scn9a is related to hereditary neuropathic pain, suggesting that it may be due to scn9a Mutations cause excessive excitement of peripheral nerves and sympathetic nerves, triggering the symptoms of primary erythromelalgia.