There are two types of PHA1, which are distinguished clinically by their severity, the genes involved and how they are inherited. One type is called autosomal dominant PHA1 (also called renal PHA1) and is characterized by excessive loss of sodium in the kidneys. This form of disease is relatively mild and can usually improve in early childhood. The other is called autosomal recessive PHA1 (also called generalized or systemic PHA1), which is characterized by sodium loss from the kidneys and other organs (including sweat glands, salivary glands, and colon). This type of PHA1 is more serious and does not improve with age.

The earliest symptoms of both types of PHA1 are usually inability to gain weight, slow growth and dehydration. They are characterized by excessive sodium release in the urine, which leads to low blood sodium levels (hyponatremia) and high blood potassium levels (hyperkalemia). Infants with PHA1 also have high levels of acid in the blood (metabolic acidosis). Among them, hyponatremia, hyperkalemia or metabolic acidosis can cause other non-specific symptoms such as nausea, vomiting, extreme fatigue and muscle weakness in PHA1 infants. Babies with autosomal recessive PHA1 may have other signs and symptoms due to involvement of multiple organs. Due to the imbalance of salt in the body, affected individuals may experience an abnormal heartbeat (arrhythmia of the heart) or an episode of shock. They may also have repeated lung infections or skin injuries. However, adults with autosomal recessive inheritance of PHA1 usually have no other symptoms or signs.

The mineralocorticoid receptor regulates the protein in the cell membrane that controls the transport of sodium or potassium into the cell. In response to signals of low sodium levels (such as the presence of aldosterone), mineralocorticoid receptors increase the number and activity of these related proteins on certain kidney cell membranes. One of these proteins is ENaC, which can transport sodium into the cell. The other protein simultaneously transports sodium out of the cell and potassium into the cell. These proteins help keep sodium in the body through a process called reabsorption, and remove potassium from the body through a process called secretion.

Mutations in the NR3C2 gene can cause the non-functional or dysfunctional mineralocorticoid receptor protein to be unable to properly regulate the specialized proteins that transport sodium and potassium. As a result, both sodium reabsorption and potassium secretion are reduced, causing hyponatremia and hyperkalemia. Mutations in the SCNN1A, SCNN1B and SCNN1G genes result in reduced or non-functional ENaC channels. Like autosomal dominant PHA1, reduced or missing ENaC function in the kidney can lead to hyponatremia and hyperkalemia. In addition, non-functional ENaC channels in other body systems can cause other signs and symptoms of autosomal recessive PHA1, including lung infections and skin lesions.

People with PHA2 usually have high blood pressure, and although their kidneys are functioning normally, their blood levels of potassium are higher (hyperkalemia). The age of onset of PHA2 is variable and difficult to determine; some affected individuals are diagnosed in infancy or childhood, while others are diagnosed as adults. Hyperkalemia usually occurs first, while hypertension develops with the environment. Patients also have high levels of chloride (hyperchloremia) and acid (metabolic acidosis) in their blood (collectively referred to as hyperchlorine metabolic acidosis). People with hyperkalemia, hyperchloremia, and metabolic acidosis may experience non-specific symptoms such as nausea, vomiting, extreme fatigue (fatigue), and muscle weakness. In addition, people with PHA2 may have high levels of calcium in their urine (hypercalciuria). 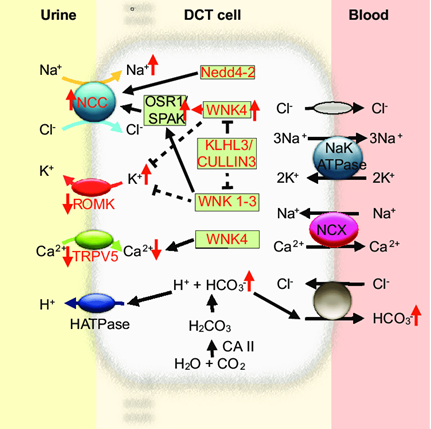 Research results indicate that PHA2 can be triggered by mutations in the WNK1, WNK4, CUL3, or KLHL3 genes. These genes all play a role in blood pressure regulation. The proteins produced by WNK1 and WNK4 genes can control the content of sodium and potassium in the body by regulating the channels in the cell membrane. This process mainly occurs in the kidneys. Mutations in any of these genes disrupt the control of these channels, resulting in abnormal levels of sodium and potassium in the body. And then, the affected individual develops hypertension and hyperkalemia. The protein produced by the CUL3 gene (called cullin-3) and the KLHL3 gene help control the amount of WNK1 and WNK4 proteins available. Cullin-3 and KLHL3 are two fragments of the complex called E3 ubiquitin ligase. The E3 ubiquitin ligase containing cullin-3 and KLHL3 can label WNK1 and WNK4 proteins with ubiquitin, causing them to break down. Mutant genes in CUL3 or KLHL3 impair the breakdown of WNK4 protein. (The effect of these mutations on the WNK1 protein is unclear.) Excessive WNK4 may disrupt the control of sodium and potassium levels, leading to hypertension and hyperkalemia.