Sporadic hemiplegic migraine is a rare form of migraine. Migraine is a symptom that causes severe tic pain in one area of the head. It has been clinically found that some people with migraine also feel nausea, vomiting, and are sensitive to light and sound. Further tracking revealed that these recurrent headaches usually began in childhood or adolescence, and may be triggered by certain foods, emotional stress, and minor head trauma. Each headache may last from several hours to several days.

In sporadic hemiplegic migraine and certain other types of migraine, a neurological symptom called an aura occurs before the headache attacks. Auras usually include temporary visual changes such as blind spots (parallax), flickering, zigzag lines, and double vision. In addition, in patients with sporadic hemiplegic migraine, the aura is also characterized by temporary numbness or weakness, which usually affects one side of the body and eventually leads to hemiplegia. Other characteristics of the aura may include difficulty speaking, confusion, and lethargy. Observations in clinical studies have shown that this aura usually develops gradually within a few minutes and lasts for about an hour.

It has been found that mutations in the ATP1A2 and CACNA1A genes can cause occasional hemiplegic migraine. The ATP1A2 gene provides a part (α-2 subunit) of the protein used to make the so-called Na+ / K+ ATPase. This protein uses energy from a molecule called adenosine triphosphate (ATP) to transport charged atoms (ions) in and out of the cell. Specifically, it draws sodium ions (Na+) out of the cell and potassium ions (K+) into the cell. The CACNA1A gene is a gene that provides instructions for preparing calcium channels. These channels transport positively charged calcium atoms (calcium ions) to the cell membrane and play a key role in the cell's ability to generate and transmit electrical signals. The proteins produced by these genes transport charged atoms (ions) across the cell membrane. The movement of these ions is essential for normal signal transmission between nerve cells (neurons) in the brain and other parts of the nervous system. As we all know, the signals between neurons depend on a chemical substance called a neurotransmitter for transmission (it is released from a neuron and absorbed by neighboring neurons). Mutant in ATP1A2 and CACNA1A disrupt the transport of ions in neurons, which is thought to impair the normal release and uptake of certain neurotransmitters in the brain. The abnormal signals generated may cause severe headache and aura features of occasional hemiplegia migraine. 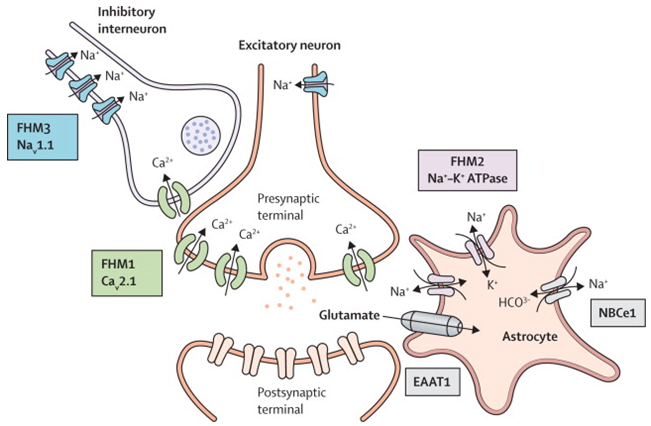 In addition, many patients with sporadic hemiplegic migraine have no mutations in the known causative genes. Researchers believe that mutations in other genes are also related to this disease, although these genes have not yet been discovered. In some common migraines, there is no evidence that mutations in the CACNA1A and ATP1A2 genes work. These migraines affect millions of people every year. Researchers are looking for other genetic changes that may underlie rare types of migraine, such as occasional hemiplegic migraine and more common forms of migraine.