GABRA1 is a gene encoding the gamma-aminobutyric acid (GABA) receptor. Among them, studies have shown that GABA is the main inhibitory neurotransmitter in the mammalian brain, and works by binding to GABA-A receptors (ligand-gated chloride channels). The chloride ion conductivity of these channels can be adjusted by reagents (such as benzodiazepines) that bind to GABA-A receptors. Through structural studies, it can be seen that GABA A receptors are composed of different combinations of five protein subunits (α, β, γ, δ and Rho), and each protein subunit is derived from a different gene. And these genes can also be produced by transcription A variety of variants encoding the same type of protein are produced. The complex formed by these subunits can form a pore channel in the cell membrane through which negatively charged chloride and chloride ions can flow. Clinical studies have found that mutations in this gene can cause juvenile myoclonic epilepsy and childhood absence epilepsy.

GABRA1 Gene is Involved in The Function of Coding Channel

As mentioned above, the GABRA1 gene encodes γ-aminobutyric acid (GABA) receptors that can bind to a neurotransmitter-γ-aminobutyric acid (GABA) that transmits signals in the brain. Once GABA is attached to GABA A receptors , The pores formed by the subunits will open and chloride ions can pass through the cell membrane. After infancy, chloride ions flow into the cell through open pores, creating an environment within the cell that blocks (inhibits) signal conduction between neurons. The main role of GABA in children and adults is to prevent the brain from being overloaded by too many signals. Conversely, in newborns and babies, when the pores are opened, chloride ions flow out of the cells, creating an environment that allows neurons to send signals.

In at least one family with juvenile myoclonic epilepsy, mutations in the GABRA1 gene have been identified. This condition usually begins in childhood or adolescence and leads to recurrent myoclonic seizures, which are characterized by rapid, uncontrolled muscle twitches. Affected individuals may also have other types of seizures, called generalized tonic-clonic seizures and absence seizures. The mutations associated with this condition change a single protein building block (amino acid) in the α1 subunit. The amino acid alanine at position 322 of the protein is replaced by the amino acid asparagine. This mutation in the GABRA1 gene leads to the formation of an abnormal α1 subunit, thereby reducing the function of the GABA A receptor. GABA A receptors containing abnormal subunits are broken down before reaching the cell membrane. Studies have shown that altered receptors can also interfere with normal receptors in cells, resulting in additional loss of normal receptors. Due to the reduced function of GABA A receptors, the signal conduction between neurons is not regulated, which may lead to excessive stimulation of neurons. Researchers believe that overstimulation of certain neurons in the brain can trigger abnormal brain activity associated with seizures. 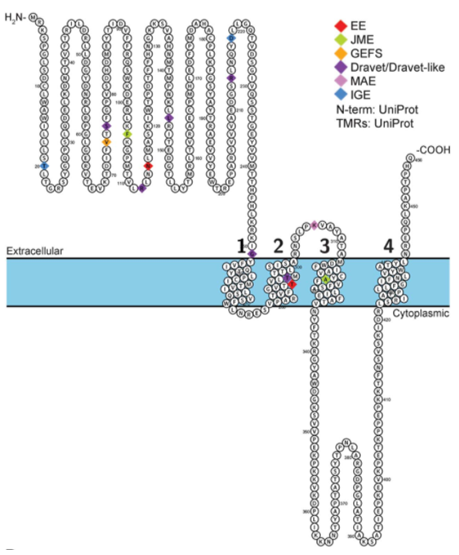 Some genes related to childhood absence epilepsy provide instructions to make GABAA receptor protein fragments (subunits), for example, the GABRA1 gene. The GABAA receptor acts as a channel that allows negatively charged chlorine atoms (chloride ions) to pass through the cell membrane. Chloride ions flow into the nerve cells (neurons) of the brain to create an environment that blocks (inhibits) the transmission of signals between neurons, thereby preventing the brain from being overloaded by excessive signals. Mutations in the GABAA receptor subunit gene result in altered subunit proteins that cannot form functional receptors, so there are fewer GABAA receptors available. As a result, the neuron’s signal is overloaded. Research suggests that overstimulation of certain neurons in the brain can trigger abnormal brain activity associated with seizures.