GABRA2 (Type A γ-aminobutyric acid receptor subunit Alpha2) is a protein coding gene. Diseases associated with GABRA2 include early infantile epileptic encephalopathy and alcohol dependence. Related pathways include nicotine addiction and sweetness signal transduction. Existing studies have shown that GABRA2 encodes a part of the α subunit of the GABA-A receptor, which is a ligand-gated chloride channel and is activated by the main inhibitory neurotransmitter GABA in the mammalian brain. The presence of this subunit makes benzodiazepine easier to bind, which is a psychotropic drug.

GABRA2 is one of 16 different alpha subunits found for GABA receptors. GABA-A has five forms, with two α, two β and one γ subunit. The various subunit isoforms found in the structure of GABA-A receptors have an impact on its function. GABRA2 is most often regarded as part of the most common expression of α2β3γ2, and is seen in 13% of all GABA-A receptors. GABRA2 subunits mainly exist in the hippocampus and/or forebrain. Compared with other alpha subunits found in GABA-A receptors, it is more localized in the brain area. Like all subunits, it is made of structurally different proteins.

GABRA2 mediates the neural activities required for information processing between neurons. As part of the GABA-A receptor it forms, GABRA2 is involved in transporting chloride ions into the membrane. The influx of chlorine causes hyperpolarization of the membrane, which leads to inhibition. GABRA2 mutations invalidate the inhibitory effect and increase the risk of anxiety, which makes it a target for the treatment of behavioral disorders. Among them, some examples of behavior disorders include anxiety, alcohol dependence and drug use. Clinically, benzodiazepines are psychoactive drugs that are known to reduce anxiety. The combination of benzodiazepines with GABRA2 causes the chloride ion channels to open, leading to membrane hyperpolarization. In addition, other anti-anxiety drugs also target this α subunit in GABA-A to induce inhibition.

In addition, studies have found that when GABRA2 activates the insula (a part of the cerebral cortex responsible for emotions), it is related to rewarding behavior. The role of GABRA2 in reward behavior explains the higher risk of alcohol dependence and drug use behavior.

Throughout the growth process of the body, GABA-A receptor subunits can be seen in various parts of the brain. The combination of subunits has a great influence on pharmacological and biophysical properties. GABRA2 has been found to mediate anxiolytic activity, which plays a key role in mood and behavior control. In addition, most GABRA2 modifications have been found to be related to alcoholism and adolescent behavior.

Long-term studies have shown that the neurotransmitter GABA and GABA receptors are related to certain mechanisms that mediate alcohol addiction. Benzodiazepines and barbiturates, which are cross-dependent with alcohol, are also molecular targets of GABA receptors. Studies have found that GABA A receptors play an important role in alcohol dependence, and long-term use of alcohol will change the functional characteristics of GABA A receptors. The mechanism of GABA A receptor adaptation to chronic alcohol regulation may involve alcohol-induced cell surface expression changes, subcellular localization, synaptic localization, receptor phosphorylation and/or changes in GABA A receptor subunit composition. Therefore, it is expected that the polymorphism of the GABA gene encoding the GABA receptor may be related to alcohol dependence, alcohol tolerance and alcohol withdrawal. 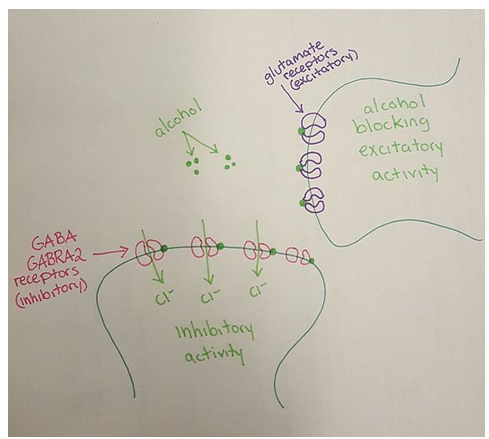 Figure 1.This is alcohol's effects on GABA receptors and glutamate receptors. (from wikipedia.org)

The International Society of Behavior and Neurogenetics reviewed the research and found that there is a link between the β1 subunit in the GABA-A receptor and the excitability of the reward-sensitive behavior brain region. The connection between the two suggests that inappropriate GABRA2 variants can lead to the development of mental disorders (such as addiction). Addictive behaviors can be regarded as aggressive and provocative, but most of them may be caused by genetic and environmental factors.