Cellular physiological properties are closely related to the biological, chemical and physical properties of cells. The patch clamp technique is a laboratory technique in electrophysiology, which is used to study ionic currents in individual isolated living cells, tissue sections, or patches of cell membrane, investigating cellular physiological functions. The development of the patch-clamp technique has given electrophysiologists new prospects. It allows high-resolution current recordings not only of whole cells, but also of excised cellular patches.

The number of positive and negatively charged ions inside a neuron differs from number found on the outside. This imbalance produces a voltage difference, or membrane potential, of about -70 mV, meaning that the inside is more negative than the outside. Ion channels help maintain the gradient by controlling the movement of ions across the cell membrane, which are essentially electrical currents.

The patch clamp rig includes a glass micropipette, which contains both an ionic solution and a chlorinated silver electrode for measuring voltages and currents. The tip of the micropipette has a polished, one micron opening that encloses a small area of membrane. To eliminate background noise from ions within the bath solution, a high-resistance seal is formed between the pipette and membrane patch. Because the resistance of the seal is in the gigaohm range, it is known as a gigaohm seal. The electrode within the pipette is connected to an amplifier that can amplifies current and voltage fluctuations that are the result of the movement of ions through channels in the plasma membrane. With the amplifier, researchers can clamp or artificially set the membrane potential at specific voltages. The amplifier regulates how much current must be added through the silver electrode in order to keep the voltage constant. Since different voltage-gated ion channels open at specific voltages, opening events are represented by the variations in the profiles of the measured currents. Alternatively, scientists can force a specific current through the electrode and record the resulting changes in potential. In this “current clamp” configuration action potentials can be recorded. 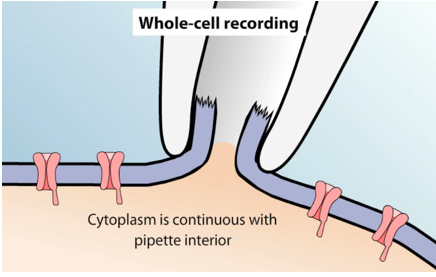 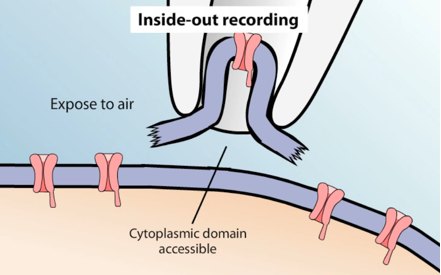 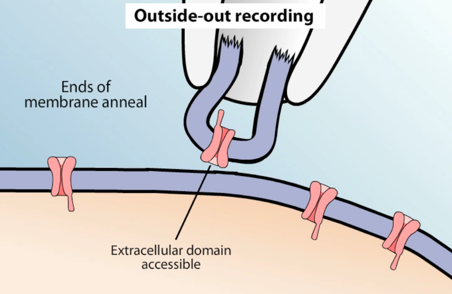 Patch clamp recording is an extremely useful technique for investigating the biophysical properties of the ion channels that control neuronal activation, as well as for screening drugs in pharmaceutical industry.

Whole-cell patch clamp is a valuable tool for measuring the response of single cells to stimulation. Furthermore, paired recordings can be used to investigate the impact of neuron firing on excitable target cells, like muscle. For example, whole-cell patch clamp can be used to stimulate firing of a motor neuron, while recordings are simultaneously taken from the muscle fiber it controls. Clear relationships between neuronal excitation and muscle activity are observed. With its exquisite temporal sensitivity to changes in voltage and currents, patch clamp recording will continue to be instrumental in understanding the biophysics of channels and neurons.

Channels can be exposed to experimental molecules to study their impact on channel activity and cellular function. Ion channels make excellent drug targets. When test compounds are added to the micropipette or bath solutions, patch clamp recordings can be used to directly test the effect of drugs, like nicotine, on neural activity. The principle of applying negative pressure to form a high resistance seal has even been applied to construct high throughput devices, which can record from numerous cells simultaneously for drug screening applications.