The voltage-dependent calcium channel subunit alpha-2/delta-1 is a protein that is encoded by the CACNA2D1 gene in humans. This gene encodes a member of the α-2/delta subunit family, which is a protein involved in the formation of voltage-dependent calcium channel complexes. The voltage-active calcium channel is an important signal protein that plays a role in the processes of muscle contraction, glandular secretion, synaptic transmission, and translation regulation. The L-type calcium ion channel is composed of the main pore-forming subunit α1 and the auxiliary subunits α2, β, δ, and γ. The α2δ1 subunit is encoded by a gene, and the gene transcription product is cleaved into two subunits (α2 and δ1) after transcription. These two subunits are connected by disulfide bonds. The α2δ1 subunit is expressed at a high level in skeletal muscle, myocardium, vascular smooth muscle and the brain. Other transcriptional splicing variants of this gene have been observed, but have not been fully characterized. 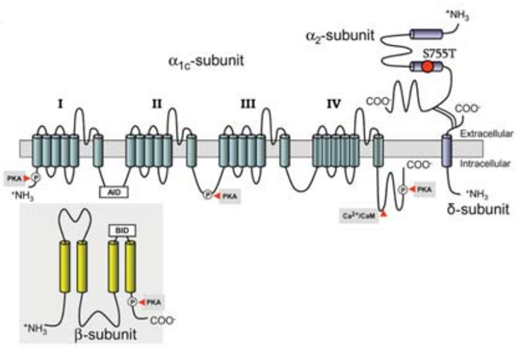 CACNA2D1 gene, also known as CACNA2, CACNL2A, CCHL2A, MHS3, CCHLA2, DHSCCA, MGC141430, HGF/SF and CH211-251K4.1, etc., is a housekeeping gene widely present in various animals. Since Ellis et al. cloned the CACNA2D1 gene from rabbit skeletal muscle in 1988, CNA2D1 genes of various animals such as homo sapiens, pan troglodytes, mus musculus, rattus norvegicus, and gallus gallus, bos taurus, danio rerio and sus scrofa have been cloned. From the existing data, the length of mRNA of CACNA2D1 gene in different animals is 3 287 -7 638 bp; the length of protein is 1 063-2 286 Aa; the length of genomic DNA is about 150,000-500,000 bp. The CACNA2D1 gene consists of 39 exons and 38 introns. The general rule of the distribution of these exons and introns on the genome is: the introns at the 5′ end are larger, and the distance between the exons is larger. The intron at the 3'end is smaller, and the distance between exons is smaller. The length of the 39 exons of the human CACNA2D1 gene varies from 23 to 159 bp, of which 10 exons are greater than 100 bp in length.

CACNA2D1 gene encodes α2 and δ1 subunits, and the gene transcription product is cleaved into two subunits α2 and δ1 after transcription. The expression of α2δ1 and α1G in COS-7 cells can increase the expressed α1G subunit calcium flux by a factor of two. Through further ablation experiments, it was found that the main reason for the adjustment of calcium flow was the α2 area at the top.

The expression of α2δ1 subunit and different α1 subunits in allogeneic expression systems proves that α2δ1 subunit can improve the expression function of membrane calcium ion channels, increase body binding sites, and change the voltage and dynamic activity of calcium flow. The α2 peptide chain located outside the cell interacts with the α1 subunit to increase the expression of calcium ion channels on the membrane, and the δ peptide chain located inside the cell regulates the properties of calcium flow. Gerald et al. used small interference RNA technology (siRNA) to inactivate α2δ1 in reconstructed degenerated myotube cells (α1s inactivation) and B13H1 skeletal muscle cells to study the function of α2δ1 subunits. They found that, whether in a single cell or in the entire transfected cell line, the significant reduction of α2δ1 did not cause changes in the number of expressions of α1s subunits, in the formation and distribution of tertiary structures, or in calcium flux density. In myotube cells, the calcium release from the endoplasmic reticulum (SR) caused by depolarization and the calcium flow through the α1s channel, which were treated with small interfering RNA technology (siRNA) and not treated with α2δ1, were compared and found to be the same. The amount is almost the same, except that the treated calcium flow is shorter.

Decreased pancreatic β-cell function or quality is a key issue in the development of diabetes. The release of insulin from β cells depends on Ca2+ through high-voltage-gated Ca2+ influx channels (HVCCs). Ca2+ influx also regulates insulin synthesis and insulin particle initiation, and contributes to the electrical activity of β cells. The α2 δ subunits of the HVCCs are encoded by CACNA2D1. α 2 δ is a key regulator of membrane binding and the function of HVCCs. The 2 δ-1 subunit that lacks α decreases Ca2+ through the HVCC subtype current generated in β cells. Reduced Ca2+ influx changes the kinetics and amplitude of the overall Ca2+ response to glucose in the pancreatic islets, and significantly reduces insulin release in both sexes.